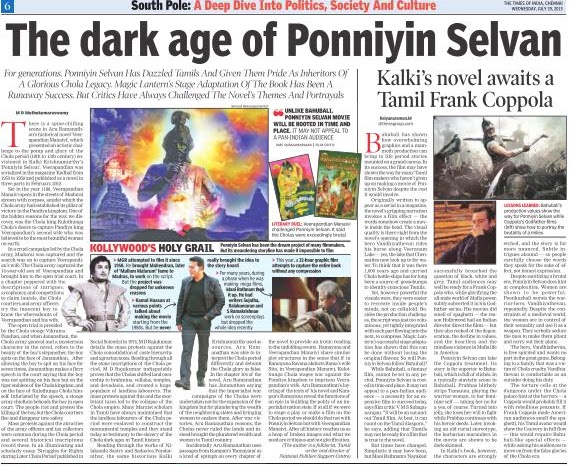 
The dark age of Ponniyin Selvan

There is a spine-chilling scene in Aru Ramanathan’s historical novel Veerapandian Manaivi (serialized in the magazine Kadhal from 1953 to 1959 and published as a novel in three parts in February 2012) which presented an artistic challenge to the pomp and glory of the Chola period (10th to 13 ) envisioned in Kalki Krishnamurthy’s Ponniyin Selvan. Set in the year 1180, Veerapandian Manaivi opens the streets of Madurai with the description that among the heaps of corpses the Chola army had established its pillar of victory in the Pandiya kingdom. One of the hidden reasons of the war, we discover, was the Chola king Kulothunga Chola’s desire to capture Pandiya king Veerapandian’s second wife who was believed to be the most beautiful woman on earth. In a cruel campaign led by the Chola army Madurai was captured and the search was on to capture Veerapandian’s wife. The Chola army captured the fourteen-year-old son of Veerapandian and brought him to the open trial court. In a chapter peppered with the descriptions of intrigues, sycophancy, and competitions to claim laurels the Chola courtiers and army officers try the innocent boy to know the whereabouts of Veerapandian and his wife. The open trial is presided by the Chola stooge Vikrama Pandian, and when Jananathan, the Chola army general and the most mysterious character of the novel, insinuates the boy with references to the beauty of his stepmother, the boy spits on the face of Jananathan.   After allowing the boy to spit on his face for seven times, Jananathan makes a fiery speech in the court saying that the boy was not spitting on his face but on the tiger emblem of the Chola kingdom, and on the face of Kulothunga Chola himself. Infuriated by the speech a stooge army chieftain beheads the boy in the open court. The people riot and protest the killing of the boy, but the Chola courtiers flee and disappear into safety. (Page 208)

Reading through the works of Nilakanda Sastry, and Sadasiva Pandarathar the same historians Kalki Krishnamurthy also read Aru Ramanathan was able to interpret the Chola period differently and debunk the Chola glory as false. In the chapter 104 of the novel Aru Ramanathan speaks through the character of Jananathan and justifies his interpretation of the Chola period. says that the imperialist war campaigns of the were undertaken not for the expansion of the for plundering the wealth of the states and bring women to enslave them as Devadasis in the temples. After war victories, Aru Ramanathan reasons, the never ruled the lands and instead brought the plundered wealth and women to the Tamil country. Even for the claim that that the Chola kings were the patrons of great poets like Kampan Aru Ramanathan says that brought Bihar Brahmins as temple priests and shunned Tamil from the precincts of the temples. Noted Tamil scholar ASGnanasambandam in his book Periyapurana Araichi expresses a similar view that Sanskrit and Brahminical rituals were imposed upon the Tamil temples during the Chola period.

Aru Ramanathan uses passages from Kampan’s Ramayana as a kind of epitaph on every chapter of the novel to provide an ironic reading the unfolding events of the novel.  Ramayana and Veerapandian Manaivi share similar plot structures in the sense that if in Ramayana Ravana abducts Rama’s wife Sita, in Veerapandian Manaivi Kulothunga Chola war against the Pandiya kingdom to imprison Veerapandian’s wife. Ramanathan’s layering of the texts of his novel and Kampan’s Ramayana reveal the functions of an epic in building the polity of an imperialist nation state. If at all if we were to stage a play or make a film the Chola should do that not with Ponniyin Selvan but with Veerapandian Manaivi. After reaches us as a heap of broken images and what we need are critiques and not glorifications.
Posted by mdmuthukumaraswamy at 7:50 AM
Labels: Times Of India, கட்டுரை, பொது