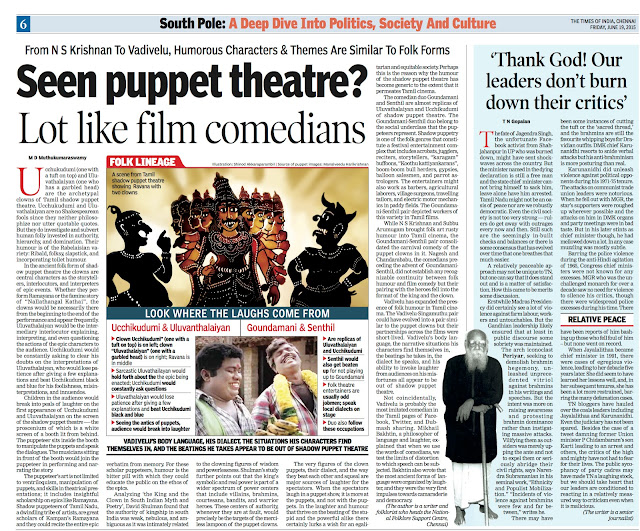 What type of humour permeates in the Tamil society? What does the study of the clowns of Tamil shadow puppet theatre reveal to us about Tamil sense of humour? Does the Tamil sense of humour exhibit a craving for an egalitarian society? Are the clowns of shadow puppet theatre generic ancestors of Tamil film comedians? These would be the questions that might preoccupy you if you were to see on stage Ucchukudumi (one with a tuft on top) and Uluvathalaiyan (one who has a garbled head), the archetypal clowns of Tamil shadow puppet theatre. Ucchukudumi and Uluvathalaiyan are no Shakespearean fools since they neither philosophize nor utter quotable quotes but they do investigate and subvert human folly invested in authority, hierarchy, and domination. Their humour is of the Rabelaisian variety, ribald, folksy, slapstick, and even scatological many times.

In the ancient folk form of shadow puppet theatre the clowns are central characters as the storytellers, interlocutors, and interpreters of epic events.  Whether they perform Ramayana or the famine story of Nallathangal Kathai, the clowns would be necessarily there from the beginning to the end of the performance with their frequent apperances. Uluvathalaiyan would be the intermediary interlocutor explaining, interpreting, and even questioning the actions of the epic characters to the audience. Ucchikudumi would be constantly asking to clear his doubts on the interpretations of Uluvathalaiyan, who would lose patience after giving a few explanations and beat him black and blue for his foolishness, misinterpretations, extrapolations, and innuendos.

Children in the audience would break into peels of laughter on the first appearance of Ucchukudumi and Uluvathalaiyan on the screen of the shadow puppet theatre the proscenium of which is a white screen of a booth lit from the behind. The puppeteer sits inside the booth to manipulate the puppets and speak the dialogues for the puppet characters. The musicians sitting in front of the booth would join the puppeteer in performing and narrating the story. The puppeteer’s art is not limited to ventriloquism, manipulation of puppets, and skills in theatrical presentations; it includes insightful scholarship on epics like Ramayana. Shadow puppeteers of Tamilnadu, a dwindling tribe of artists, are great scholars of Kampan’s Ramayana and they could recite the entire epic verbatim from memory. For these scholar puppeteers humour is the bitter pill with which they could educate the public on the ethos of epics.

Analyzing ‘the King and the Clown in South Indian Myth and Poetry’, David Shulman found that the authority of kingship in south India was weak, nebulous, and ambiguous as it was intimately related to the clowning figures of wisdom and powerlessness. Shulman’s study further points out that the king’s symbolic and real power is part of a wider spectrum of power centers that include villains, Brahmins, courtesans, bandits, and warrior heroes. These centers of authority, whenever they are at fault, would precisely be the targets of the merciless lampoon of the puppet clowns.

The very figures of the clown puppets, the low dialectal variety of spoken Tamil the clown puppets adopt for their distorted speech, the beating and squealing of the puppets are the three major sources of laughter for the spectators.  When the spectators laugh in a puppet show, it is more at the puppets, and not with the puppets. In the laughter and humour that thrive on the beating of the stupid and the powerful alike there certainly lurks a wish for an egalitarian and equitable society. Perhaps this is the reason why the humour of the shadow puppet theatre has become generic to the extent that it permeates the Tamil cinema.

The comedian duo Gaundamani and Senthil are almost replicas of Uluvathalaiyan and Ucchikudumi of shadow puppet theatre. The inheritance of a gain in the Gaundamani-Senthil duo is not only structural and generic but also the social under class values the puppeteers represent. Shadow puppetry is one of the folk genres that constitute a festival entertainment complex that includes acrobats, jugglers, reciters, storytellers,  Karagam buffoons, Koothu kattiyankarans, boom-boom bull herders, gypsies, balloon salesmen, and parrot astrologers. The entertainers might also work as barbers, agricultural laborers, village surgeons, travelling tailors, and electric motor mechanics for the paddy fields. The Goundamani-Senthil pair depicted workers of this variety in Tamil films. While N.S.Krishnan and Subbu Arumugam inaugurated the transposition of the folk art rusty humour into Tamil cinema, the Gaundamani-Senthil pair consolidated the carnival comedy of the puppet clowns inside the realm. Of course Nagesh and Chandarababu, the comedians preceding the advent of Gaundamani-Senthil, did not establish any recognizable continuity between folk humour and film comedy but their pairing with the heroes structurally fell into the format of the king and the clown. The arrival of Vadivelu, the master comedian again expanded the presence of folk humour in Tamil cinema. Vadivelu-Singamuthu pair could have evolved into a pair similar to the puppet clowns but their partnerships across the films were short-lived.

Vadivelu’s body language, the narrative situations the characters he adorns find themselves in, the beatings he takes in, the dialectal variety of his spoken Tamil, and his ability to invoke laughter from audiences on his misfortunes are all the characteristics very similar to that of the clowns of shadow puppet theatre. Vadivelu is also probably the most imitated comedian in the Tamil pages of Facebook, Twitter, and Dubmash sharing. Mikhail Bakhtin, a philosopher of language and laughter, once explained that our everyday speech is full of words of other people, and when we use the words of comedians we test the limits of distortion to which speech can be subjected, and discover the remarkable resiliency and flexibility inherent in language. It may be also reassuring to know that Bakhtin also wrote that the most ancient forms of for representing language were organized by laughter, and they were the very first impulses towards camaraderie and democracy.
Posted by mdmuthukumaraswamy at 6:14 PM
Labels: Times Of India, கட்டுரை, பொது