Stepping out of the known: The Life and Theatre of Veenapani Chawla | Article published in the Times of India 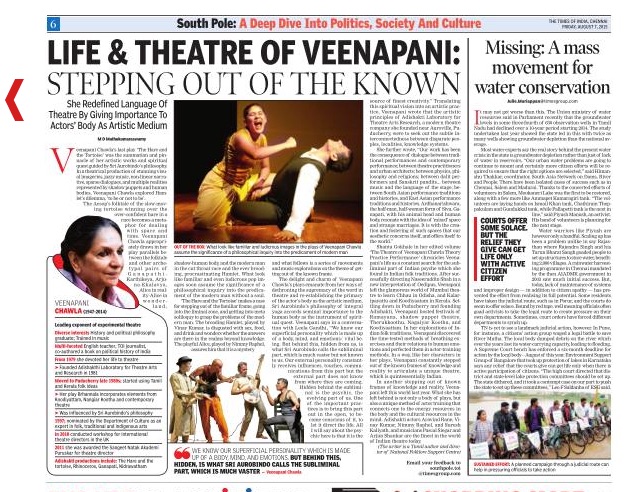 published in the Times of India can be accessed online at  http://epaperbeta.timesofindia.com/index.aspx?eid=31807&dt=20150807 on page 6


Stepping out of the known The theatre of Veenapani Chawla

Chawla’s last play The Hare and the Tortoise the summation and of her artistic works and the spiritual quest guided by Sri Aurobindo’s philosophy. In a theatrical production of stunning visual imageries, jazzy music, non-linear narrative, sparse dialogues, and multiple realities represented by the shadow puppets and human bodies Veenapani Chawla explored Hamlet’s dilemma, ‘to be or not to be’. The Aesop’s folktale of the slow moving tortoise winning the over confident hare in a race becomes a metaphor for dealing with space and time. Veenapani Chawla appropriately draws her play parallels between the folktale and other archetypal pairs of Ganapathi- Karthikeya, Arjuna- Eakalyva, Alice in reality- Alice in wonderland, shadow- human body, and the modern man in the cut throat race and the ever brooding, procrastinating Hamlet. What familiar and even ludicrous pop images soon assume the significance of a philosophical inquiry of the predicament of the modern man without a soul. Very interestingly The Hare and the Tortoise a case for stepping out of the familiar frame, going into the zone, and getting into the mode of Meta soliloquy to grasp the problems of the modern man. The brooding Hamlet, played by Vinay Kumar, is disgusted with sex, food, drink and his own shadow and wonders whether the answers are there in the realms beyond knowledge. The playful Alice, played by Raphel, assures him that it is a mystery and what follows is a series of movement and music explorations on the theme of getting out of the known frame.

The delight and the charm of Veenapani Chawla’s plays emanate from her ways of dethroning the supremacy of the word in theatre and reestablishing the primacy of as the artistic medium. Sri Aurobindo’s philosophy of integral yoga accords seminal importance to as the instrument of spiritual quest and Veenpani says in a conversation with Leela Gandhi, “We know our superficial personality which is made up of a body, mind, and emotions/ vital being. But behind this, hidden from us, is what he Sri Aurobindo calls the subliminal part, which is much but not known to us. Our external personality constantly receives influences, touches, communications from this the external part does not know from where they are coming. Hidden behind the subliminal is the psychic, the evolving part of us. One of the important practices is to bring this part out in the open, to become conscious of it, to let it direct the life. All I will say about the psychic here is that it is the source of the finest .” Translating this spiritual vision into an artistic practice Veenapani wrote that the artistic principles of the Adishakti Laboratory for Theatre Arts Research, a modern theatre company she founded near Auroville, Puduchery, to seek out the subtle between disparate peoples, localities, knowledges.

She further wrote, “Our work has been the consequence of dialogue between traditional performances and contemporary performance; between theatre practitioners and urban architects; between physics, philosophy and religions.; between Dalit performers and Sanskrit pundits; between Vedic chanting, Koranic chanting and Koodiyattam Vachika; between the needs of the contemporary actor’s body and the resources of traditional medicine; between music and the language of the stage; between music and Nada Yoga; between South Asian performance traditions and histories, and East Asian performance traditions and histories. , the half-man, half-woman form of Siva, Ganapati, with his animal head and , resonate with the idea of ‘mixed’ space and strange marriages. It is with the creation and fostering of such that our aesthetic concerns itself, and offers itself to the world”

While Veenapani’s plays Ganapati, Brhannala and The Hare and the Tortoise stand testimony to her artistic vision of in the time, Shanta Gokhale in her edited volume, The Theatre of Veenapani Chawla Performance chronicles Veenapani’s life as a constant search for the subliminal part of Indian psyche which she found in Indian folk traditions. After successfully directing Naseeruddin Shah in a new interpretation of Oedipus Veenpanai left the glamorous world of Mumbai theatre to learn Chhau in Odisha, Kalaripayattu and Koodiyaatam in Kerala subsequently. After settling down in Puduchery and founding Adishakti Veenapani constantly hosted festivals, of Ramayana, shadow puppet theatre, Therukkoothu, Nagaiyar , and Koodiyaattam. In her constant artistic explorations of Indian folk traditions, Veenapani discovered the time-tested methods of breathing exercises and their relations to human emotions and perfected them in actor training methods. In a way like her characters in her plays, Veenpani constantly stepped out of the known of knowledge and reality to articulate a unique theatre, which is quintessentially Indian. In one of her characteristic  stepping out of known of knowledge and reality in November 2014 Veenapani Chwala left this world. What she has left behind at Adishakti is not only an intriguing body of plays and performances, but also of actor training that connects one to the energy resources in the body and the cultural resources in the mind. actors Aravind Rane, Vinay Kumar, Nimmy Raphel, and Suresh Kaliyath, and musicians Pascal and Arjun Shankar are the finest in the world of Indian theatre today.
Posted by mdmuthukumaraswamy at 7:30 AM
Labels: Times Of India, கட்டுரை, பொது