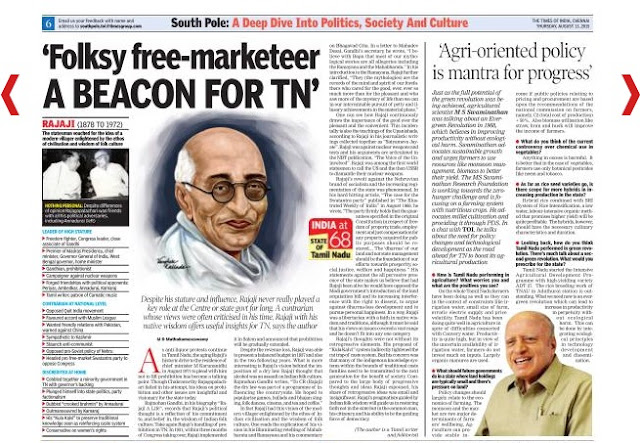 The Times of India features my article on Rajaji in a series of introspective articles exploring Tamilnadu when  the nation is about to celebrate its 68th independence day. The article can be accessed at http://epaperbeta.timesofindia.com/index.aspx?EID=31807&dt=20150813 on Page 6

The Relevance of Rajaji's vision Despite his stature and influence, Rajaji never really played a key role at the Centre or in the state government for long. A contrarian whose views were often loudly criticized in his time, Rajaji with his faith in offers useful insights for the state, says the author                                                                                                            ByM D Muthukumaraswamy As anti-liquor protests continue in Tamil Nadu, the ageing Rajaji’s historic drive to the residence of the then chief minister M Karunanidhi August 1971 to plead with him not to lift prohibition has become a talking point. Though Chakravarthy Rajagopalachari failed in his attempt, his ideas on prohibition and other issues are insightful and visionary for the state today. Rajmohan Gandhi, in his biography “Rajaji A Life”, records that Rajaji’s political thought is a reflection of his unwavering commitment to and belief in the wisdom of . Take again Rajaji’s handling of prohibition in TN: In 1931, within three months of Congress over, Rajaji implemented it in his own Salem district and announced that will be gradually extended. Despite the revenue loss, Rajaji was able to present a balanced budget in 1937 and also in the two following years. What is more interesting is behind the imposition of dry . Rajaji thought that alcohol was an assault on Indian folk culture. Rajmohan Gandhi writes, “To CR (Rajaji) the dry law was part of a bigger programme of influencing the countryside. He hoped to popularise games, ballads and singing, folk dances, street dramas, cinema, and tea and coffee.”      In fact Rajaji’s every thought had this vision of the modern villager enlightened by the ethos of Indian civilization and the wisdom of folk culture. One reads the explication of his vision in his illuminating retelling of Mahabharata and Ramayana and his commentary on . In a letter to Mahadev Desai, Gandhi’s secretary, he wrote, “ I believe with Bapu that most of our mythological stories are all allegories including the Ramayana and the Mahabharata.” In his introduction to the Ramayana, Rajaji further clarified, “They (the mythologies) are the records of the mind and spirit of our forefathers who cared for the good, ever, ever so much more than for the pleasant and who saw more of the mystery of life than we can in our interminable pursuit of petty and illusory achievements in the material plane.”      One can see how Rajaji continuously draws the importance of the good over the pleasant and the convenient. This incidentally is also the teachings of the Upanishads, according to Rajaji in his journalistic writings collected together as “Satyameva Jayate”. Rajaji was completely against nuclear weapons and tests and his arguments are comprehensively articulated in the NBT publication, “The Voice of the Uninvolved”. Rajaji was among the first world statesmen the US and the then USSR to dismantle their nuclear weapons.       revolt against the Nehruvian brand of socialism and the increasing regimentation of the state was phenomenal. In his hard hitting article, “The case for the Swatantra party” published in “The Illustrated Weekly of India” in August 1969, he wrote, “The party firmly holds that the guarantees specified in the original Constitution in respect of freedom of property, trade, employment and just compensation for any property acquired for public purposes should be restored… It stands for the individual to retain his identity and his motives for honest endeavour, and for his serving the community with a willing heart and not out of compulsion. The '' of our land and not state management should be the foundation of all our efforts towards prosperity, social justice, welfare and happiness." His statements against the all pervasive presence of the state makes us believe that had Rajaji would have firmly opposed the Modi government’s introduction of the land acquisition bill and its increasing interference with to dissent, to argue against -less development and to pursue personal happiness. In a way, Rajaji was an Indian libertarian with a firm faith in native wisdom and traditions, although it must be said that his views on issues covered a vast range and he doesn’t really fit into any one category.      thoughts were not without its retrogressive elements. His proposal of “Kula Kalvi” system indirectly tightened the rat trap of the caste system. But his concern was that many of the indigenous knowledge systems were within the bounds of traditional caste families and they need to be transmitted to the next generations for the benefit of the whole society. Compared to the large body of progressive thoughts and ideas Rajaji espoused and propagated, his share of retrogressive ideas was small and insignificant. pragmatism guided by Indian folk wisdom will guide us in restoring in the in the Indian common man, his citizenry, and his ability to be the guiding force of Indian democracy.
Posted by mdmuthukumaraswamy at 8:07 AM
Labels: Times Of India, கட்டுரை, பொது