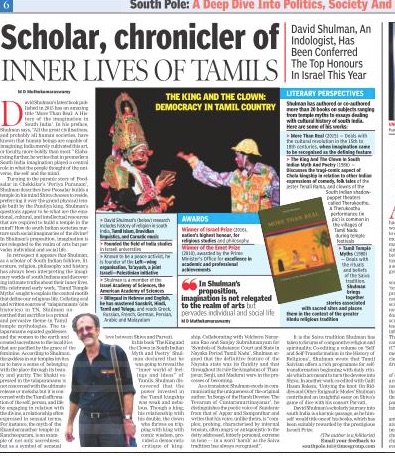 My article on David Shulman's scholarly contributions to the understanding of Tamil society, culture, and religion is published today in the Times of India Chennai edition. You may read the article online at


David Dean Shulman: Chronicler of the inner lives of the Indians, especially the Tamils

David Shulman’s latest book published in 2015 has an amazing title More Than Real: A History of the imagination in South India. In his preface, Shulman says, “ All the great , and probably all human societies, have known that human beings are capable of imagining; India merely cultivated this art, or faculty, more boldly than most.” Elaborating writes that in the South India the of imagination played a central role in shaping up the models of , self, and mind. Turning to the Puranic story of Poodsalar in Chekkilar’s Periya Puranam Shulman describes how Poosalar builds a temple in his mind which Shiva chooses to reside in preference to the grand physical temple built by the Pandiya king. Shulman’s valid questions appear to be what are the emotional, cultural, and intellectual resources that are required to build a temple in the mind? How do the South Indian societies historically nurture such social imaginaries of the divine? In Shulman’s proposition imagination is no longer relegated only to the realm of it is to be seen as a field of social practices, a form of work, and a form of negotiation between individuals and the field of possibilities.

In appears that Shulman as a scholar of South Indian folklore, literature, religion, philosophy and history has always been interpreting the imaginary worlds of the South Indians and discovering intimate truths about their inner lives. His celebrated early work, Tamil Temple Myths sought to explain the central motifs that define our religious life. Collating a vast oral and written sources of in Tamilnadu Shulman unearthed that sacrifice is a primal and pervasive theme in Tamil temple mythologies. The equated the goddesses and the women in general to the earth and created sacredness to the localities that are pacified by the grace of the feminine. According to Shulman, the goddess in our temples represents a place, its beauty, its purity, and an invitation to have a sense of belonging. The all pervasive sacrifice motif is concerned with the need to express, preserve, and use power and maintain the purity of a locality. The expressed in the is not concerned with the ultimate release or moksha it is concerned with the Tamil affirmation of the self, person, and life by engaging in relation with the divine, a relationship often expressed in sensual terms.

In his book The King and the Clown in South Indian Myth and Poetry Shulman declared that he was going to reveal the “inner world of feelings and ideas” of the Tamils. Shulman discovered that the power invested in the Tamil kingship was weak and nebulous. The kingship’s intimate relation to his double, the clown - comicality, and wisdom - revealed the balancing critique that prevailed in the Tamil democratic polity. Collaborating with Velcheru Narayana Rao and Sanjay Subrahmanyam for the book Symbols of substance: Court and State in Nayaka Period Tamilnadu Shulman argued that the definitive feature of the Nayaka state was its fluidity and throughout its rule the kingdoms of Thanjavur, Senji, and Madurai were in the processes of becoming. Ruled by the Telugu migrant warriors the Nayaka period also saw a lot of wealth being wasted on enjoyment.

As a translator Shulman excels in communicating the uniqueness of the original author and his texts. In Songs of the Harsh Devotee: The Tevaram of Cuntaramurtinayanar Shulman distinguishes the poetic voice of Sundarar from that of and Sampanthar and writes that his voice unlike theirs is “complex, probing, by a high degree of internal tension, often angry or antagonistic to the deity addressed, bitterly personal, extreme in tone- in a word ‘harsh’ as the Saiva tradition has always ”

It is the Saiva tradition Shulman has taken most prominently to the forums of comparative religion and spirituality. Co-editing a volume on Self and Self-Transformation in the History of Religions Shulman wrote in his essay Tamil Saivism offers a rich for self transformation beginning with the daily rituals which are meant to turn the ritual performer into Shiva. On another significant work co-edited with Galit Hasan Rokem, Untying the knot: On Riddles and Other Enigmatic Modes Shulman contributed an insightful essay on Shiva’s game of dice with his consort Parvathi, a mural painting in the caves.

David Shulman, Renee Lang Professor of Humanist Studies at the Hebrew University in Jerusalem has been worldwide as the ambassador of South Indian culture and religion. David Shulman’s scholarly journey into South India is a karmic passage, as he himself would title one of his books, that is suitably rewarded the prestigious Prize.
Posted by mdmuthukumaraswamy at 7:13 AM
Labels: Times Of India, கட்டுரை