What is right with Anirudh Ravichander? | The Times of India 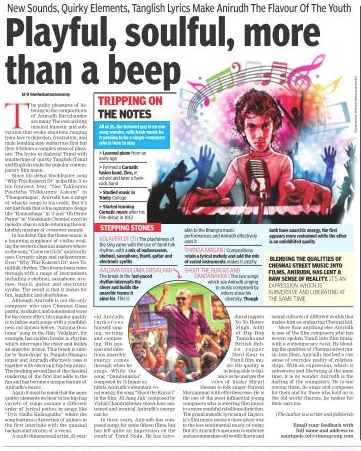 What is right with Anirudh Ravichander?

The guilty pleasures of listening to the compositions of Anirudh Ravichander are many. The overarching musical and subversion that envelope of heterosexual love, dejection, frustration, and male bonding expressed in the lyrics of spoken dialectal Tamil and quirky Tanglish (a portmanteau word for mixture of Tamil and English) in Anirudh’s compositions embarrass you first and then lead you to an inward complex pleasure. From his debutante blockbuster of a song Why This Kolaveri  in 3 to his funniest, best Nee Takkunnu Thikkunnu Aakum  in Thangamagan if Anirudh has a range of wacky songs to his credit, there is another set of songs from Kannazhaga in 3 to Oh Penne Penne in Vanakkam Chennai that excel in melodic charm while retaining the outlandish mixture of crossover sounds.

Musically, Anirudh is so promiscuous that the location of music is shifted in his compositions from rendition to the dizzying display of mixing of sounds. In his film 3 the theme music is a haunting symphony of violins evoking the western classical masters whereas the song Come on Girls in the same film quizzically uses Carnatic and  haphazardly. Even Why This Kolaveri uses a Tamil folk rhythm; its instrumentation displays a mix of , , saxophone, , , acoustic guitar, and keyboards mixed with electronic and scratches. The result is that makes one believe the thing about music is all banalities are suddenly invested with not profound meanings but with fun, laughter, and playfulness.

Although Anirudh is not the only film composer who uses Chennai Gana , its dialect, and nonsensical words for the oblique comic effects his singular quality is to infest such songs with a youthfulness not known before. Douluma song in the film Vedalam, for example, has sudden speed breakdowns in the rhythm which interrupts the cheer and builds the anarchic trance it aims for. This speed break is rather a ‘ drop’ as it is known in the Punjabi Bhangra stage music performances and Anirudh effectively uses it in his unique way in Aaluma Doluma song. Such speed breakers in rhythm, mocking second lines of the classical rendering of the first line, instantaneous or daring rise to trance, electronic traversing of ping-pong hip-hop sounds throughout the songs, and unusual mixtures of sounds are the unique features of Anirudh’s music.

Again, it must be noted that the same quirky elements we hear in his hip-hop variety of songs assume a different order of lyrical pathos in songs like Uyir Nadhi Kalangudhe where the song features a distortion of guitars on the first interlude with the background of , and that is very unusual.

Form his first film 3 in 2102 to the latest Thangamagan in 2015 Anirudh has scored some fifteen films or his impact on the youth culture of Tamilnadu is immense. From the grand melodic lyricism of Ilayaraja variety Tamil film music seems to have moved towards a less sentimental and more youthful rebellious music with the advent and rise of Anirudh. His mockery is less in scale in comparison with the film compositions of Santosh Narayanan but Anirudh’s openness to embrace and accommodate old world charm and sound cultures of different worlds makes him an endearing Chennai kid. More than anything else Anirudh is one of the film composers who has brought spoken Tamil close to music. By bringing the qualities of into film music Anirudh has moved music, like many other film music composers before him, to a less godly place where the biting reality of everyday relationships finds an expression that is subversive and liberating at the same time. No wonder Anirudh is the darling of the youngsters in Tamilnadu. He is one among them; he sings and composes for them. For those who cannot come out of the old world charms and appreciate Anirudh’s music the Kali Yuga has advanced. By the way, who said there is no fun and anarchy in Tamilnadu?
Posted by mdmuthukumaraswamy at 5:55 AM
Labels: Times Of India