Plays of N.Muthusamy | Article published in the Times of India 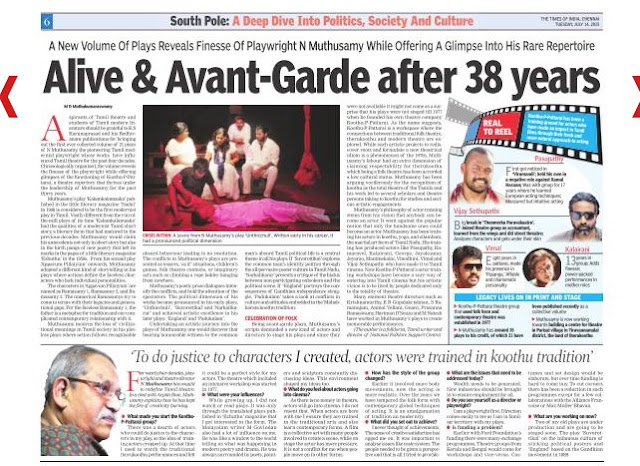 The article can be accessed at the Times of India online  at http://epaperbeta.timesofindia.com/index.aspx?eid=31807&dt=20150714 on page 6 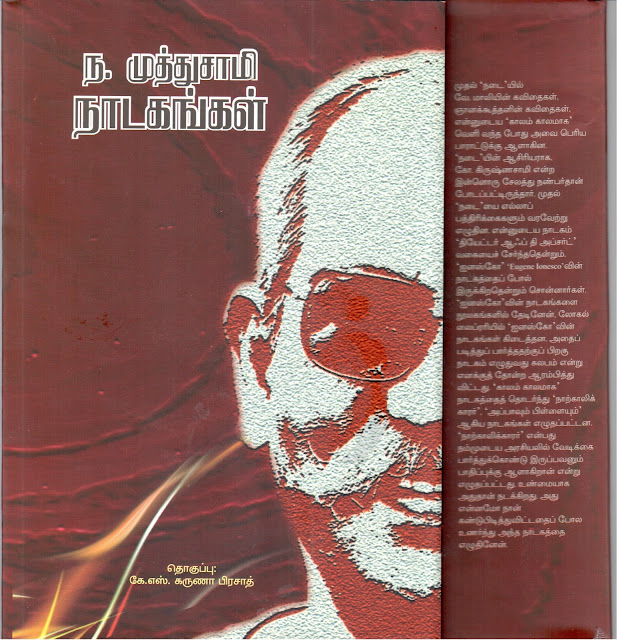 Aspirants of Tamil theatre and students of Tamil modern literature should be grateful to KSKarunaprasad and his Bodhivanam publications for bringing out the first ever collected volume of twenty one plays of NMuthusamy, the pioneering Tamil modernist playwright whose works the Tamil theatre scene for the last four decades. Chronologically organized with three introductory essays and two prefaces -one by the publisher and another by Muthusamy -the volume in its odd thousand pages reveal the finesse of Muthusamy as a playwright while offering glimpses of the functioning of Koothu-P-Pattarai, a theatre repertory that thrives under the leadership of Muthusamy for the last thirty years.
play ‘Kalamkalamaaka’ published in the little literary magazine ‘Nadai’ in 1968 is considered to be the first modernist play in Tamil. Vastly different from the run of the mill plays of its time ‘Kalamkalamaaka’ had the qualities of a modernist Tamil short story, a literary form that had already matured in the previous decades. would claim his antecedents not only in short also in the birth pangs of new poetry that left its marks in the pages of a little literary magazine ‘Ezhuthu’ in the 1950s.  From his second play, ‘Appavum Pillaiyum ‘ onwards Mutusamy adopted a different kind of storytelling in his plays where actions define the faceless characters who lack individual personalities. The characters in ‘Appavum Pillaiyum’ are named as Ramasamy 1, Ramasamy 2, and Ramasamy 3. The numerical Ramasamys try to come to terms with their legacies and generational gaps and Ramasamy 1 says poignantly, “ Which old face can we remember like this? Can we remember any face like this? May be it is an imitation. May be it is an abstraction. It is a hallucination. Some aspects of a face, become prominent and we tend to believe that is the face. Many times on the abstracted face of the father many faces also come and stick together. We have to remove one layer after another to discover our own father. Haven’t I seen my father’s face at the age of seven? If Rosa Iyer’s imitation comes to my mind even before destroying it, I want to insult it”.  For the faceless Ramasamy 1 the father is not simply a biological father, but a metaphor for tradition and our complicated contemporary relationship with it.

In complete defiance of Aristotelian dramatic structure Muthusamy mourns the loss of meanings in Tamil society in his plot less where action follows recognizable absurd behaviour leading to no culmination or a resolution. The conflicts in Muthusamy’s plays are presented as teasers, ‘as if’ situations, children’s games, folk theatre contexts, or purely imaginary acts such as climbing a rope ladder hanging from nowhere. poetic prose dialogues intensify the conflicts, and hold the attention of the spectators. The political dimension of his works became quite pronounced in his early plays, ‘Unthicchuli’,  ‘Suvorottikal’ and ‘Narkalikarar’ and achieved artistic excellence in his later plays, ‘England’ and ‘Padukalam’.

Undertaking an artistic journey into the plays of Muthusamy, one would discover that bearing honourable witness to the common man’s absurd Tamil political life is a central theme in all his plays. If ‘Suvorottikal’ explores the common man’s identity politics through the all-pervasive poster culture in Tamilnadu, ‘Narkalikarar’ presents a critique of political hiatus of the non-participatory onlookers. If ‘England’ portrays the consequences of the Gandhian independence struggle,  ‘Padukalam’ takes a close look at the cultural and attitudinal conflicts embedded in the Mahabharata tradition.

Being avant-garde plays, Muthusamy’s scripts demanded a new kind of actors and directors to stage his plays and since they were not available it might not come as a surprise that his plays were not staged till 1977 when he founded his own theatre company Koothu-P-Pattarai. As the name suggests, Koothu-P-Pattarai is a workspace where the connections between traditional folk theatre, Therukoothu and modern theatre are explored for the benefit of both. While such artistic projects to rediscover roots and formulate a new theatrical idiom is a phenomenon of the 1970s, Muthusamy’s had an extra dimension of claiming respectability for Therukoothu which being a folk theatre has been accorded a low cultural status.   has been writing, speaking, and arguing vociferously for the last thirty years for the recognition of as the total theatre of the Tamils and his pioneering work led to several scholars and theatre persons taking to Koothu for studies and serious artistic engagements.

philosophy of actor training stems from his vision that anybody can become an actor. It went against the popular notion that only the handsome ones could become an actor. has been training his actors in , Yoga, and Silambam, the martial art form of Tamilnadu. He expects his actors to be open training in any native folk art form as well as any international training in theatre. grounding in Tamil traditional art forms while being open to international influences have yielded rich results in producing extraordinary actors such as Pasupathy, Kalairani, Jeyakumar, George, Chandra and Jaya Rao.

vision of common man, the folk, and ordinary people having the artistic potential emanates from his nostalgic reconstruction his native village Punjai in his plays and short stories. Once Muthusamy declared that writing every inch of Punjai, and all the people he had met in the village during his childhood is the mission of his works. True to his words we see in his works the mini universe of Punjai with its gods, streets, characters, and objects populate his plays, confronts the of city life, and serves as a backdrop of reference. For Muthusamy Punjai is no utopia since it has its own flaws of feudalism, hierarchy, and inaction. But, Punjai as a symbol of folk wisdom has the artistic potential to liberate the modern Tamil from the abysmal absurdities of city life. In a way, Muthusamy’s plays are tributes to Punjai, the eternal wisdom of an Indian village.

Many eminent theatre directors such as Krishnamurthy, ERGopalakrishnan, SRamanujam, Gnani, Prasanna Ramaswamy, Rajendran, Arumugam, Anmol Vellani, Hartman D’Souza, M, and S. Ravindran (lighting) with Muthusamy’s plays to create memorable performances in Tamil theatre. A truck load of actors, Pasupathy, Kumaravel, Kalairani, George, Jayakumar, Jeyarao, Manimekalai, Meenakshi, Devi, Palani, Vinodhini, Somu Anandsamy, Vimal and Vijay Sethupathy have gone from Koothu-P-Pattarai to  Tamil cinema. Now Koothu-P-Pattarai’s actor training workshops have become a sure way of entering into Tamil his artistic vision is to be lived by people dedicated only to the totality of theatre.
Posted by mdmuthukumaraswamy at 7:03 AM
Labels: Times Of India, கட்டுரை, பொது